Adam Martin reviews UFC Vegas 20 and makes his fight picks in the Fanatics Fantasy MMA app. Who ya got? 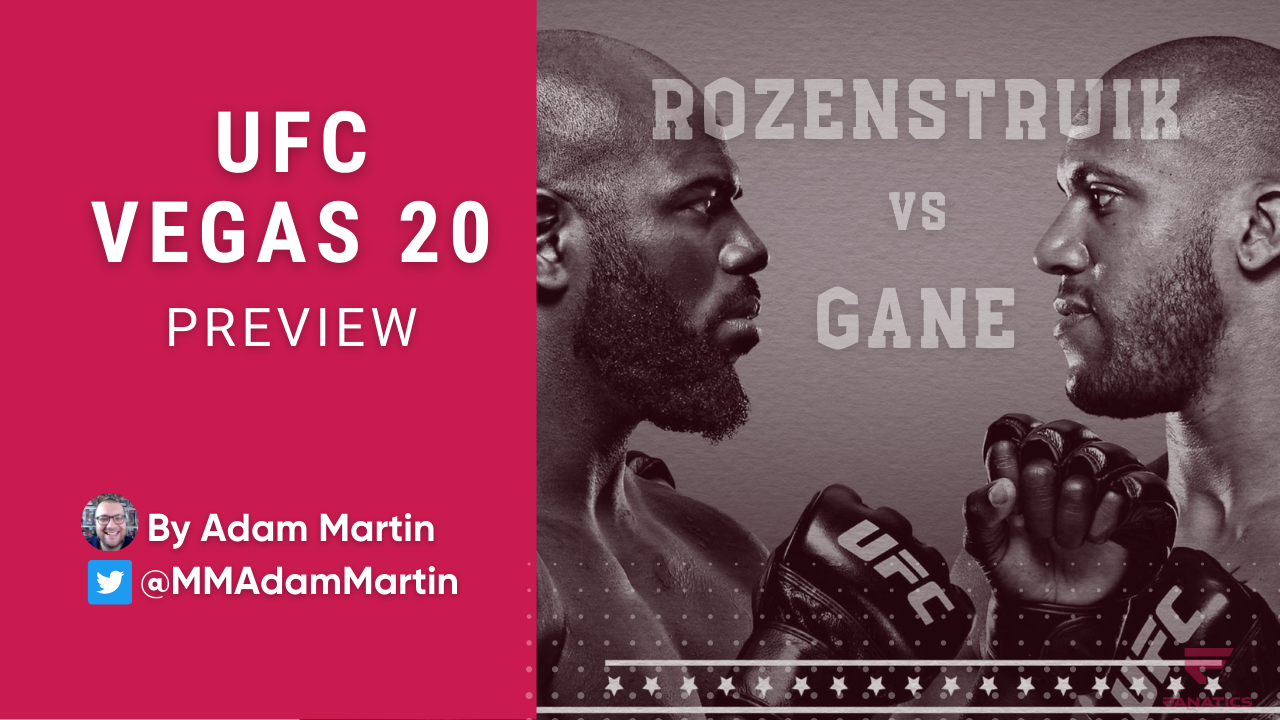 Mixed martial arts is back in your life this Saturday night when UFC Vegas 20 goes down. In addition to an intriguing heavyweight main event between sluggers Jairzinho Rozenstruik and Ciryl Gane, there are five other great fights on an action-packed main card. A week after a crazy event that saw a number of big upsets, let’s dive deeper into UFC Vegas 20 with my picks.

The main event of UFC Vegas 20 is a terrific heavyweight bout between No. 7 ranked Ciryl Gane and No. 3 ranked Jairzinho Rozenstruik. Please read my prospect profile on Gane to learn more about his career and his fighting skills.

In general, though, it’s fair to say Gane is the best heavyweight prospect we’ve seen in the UFC since his former teammate Francis Ngannou.

Like Ngannou, Gane is a big puncher on the feet and can finish his opponents with strikes. But what makes him truly special is that he has the ability to also submit his opponents on the mat, which is a rarity for a heavyweight. Gane is very well rounded and could make a title run soon. With a 4-0 record already in the UFC, the sky is very much the limit for Gane in the Octagon.

As good as Gane is, you have to give Rozenstruik a lot of credit, too. In fact, he’s actually the higher-ranked fighter in this matchup, and at 5-1 in the UFC, he had done very well for himself at the highest level of the sport. However, I’m still not sold on his grappling, and I believe that could be his downfall in this fight. If Rozenstruik can keep it standing, he will have the chance to knock out Gane. But if Gane can mix it up and implement his wrestling and submissions, this is going to be a much tougher night for Rozenstruik. It’s heavyweight, so anyone can be knocked out, but overall Gane is the better MMA fighter. Give me Ciryl Gane to win inside the distance.

The co-main event should be a very exciting light heavyweight contest between Magomed Ankalaev and Nikita Krylov. Ankalaev joined the UFC in 2018 and has already racked up an impressive 5-1 record in the Octagon with four wins by knockout. He is a deadly striker who is very aggressive and powerful and who is also very smart defensively. Had he not tapped out with one second left in his fight against Paul Craig, he would be 6-0 in the UFC right now. As it stands, Ankalaev is ranked No. 11 in the UFC and is hoping to take Krylov’s No. 8 ranking. Krylov is in his second stint in the UFC and this time around he looks much improved. He’s 2-2 in his return, with wins over Johnny Walker and Ovince Saint Preux and losses to Jan Blachowicz and Glover Teixeira. In general I think Krylov is pretty underrated, but I don’t like this matchup for him. I believe Magomed Ankalaev controls the range and beats Krylov by TKO.

This women’s flyweight bout between Mayra Bueno Silva and Montana De La Rosa is among the trickier fights on the card to call. Both Silva and De La Rosa do their best work on the mat, so it will be interesting to see who has the upper hand if the fight does end up hitting the floor. On the feet, I would give the edge to Silva, but De La Rosa is a very durable fighter herself. This is a very close fight but ultimately I think Mayra Bueno Silva gets her hand raised by decision.

This bantamweight bout between Jimmie Rivera and Pedro Munhoz was originally set to take place at UFC 258, but it was pushed back after two weeks after Rivera tested positive for COVID-19. Now that he’s cleared his 14-day quarantine, Rivera is really to go in this rematch between top-10 fighters at 135lbs. These two previously met in November 2015, with Rivera edging out a split decision. In the six years since then, both men have proven to be elite bantamweights who are just below the championship level. Like the first time these two met, I’m expecting a very close fight that will go the distance. In fact, another split decision wouldn’t surprise me. It’s going to be a very close fight but I have to go with Jimmie Rivera here. I believe he will be the more effective striker through 15 minutes and take home the decision.

This women’s strawweight bout between Angela Hill and Ashley Yoder is also a rematch. These two previously met back in 2017, with Hill defeating Yoder via unanimous decision. That’s kind of what I think happens again in the rematch. Although Hill doesn’t have a great UFC record at 7-9, she has been fighting high level competition lately, losing narrow split decisions to the likes of Michelle Waterson and Claudia Gadelha. Yoder, similarly, has a mediocre 3-5 record in the Octagon, but has generally lost when she steps up in competition. If Yoder can implement her grappling game, she will have the chance to get the upset, but as long as Hill can keep this fight standing she will have the advantage in the striking. My pick is Angela Hill to win by decision.

Opening up the main card is a featherweight bout between Alex Caceres and Kevin Croom. Originally joining the UFC in 2011, Caceres has a wealth of experience in the Octagon, having racked up a 12-10, 1 NC record overall during his decade with the world’s leading MMA promotion. “Bruce Leeroy” has been in particularly good form as of late, too, with three straight wins heading into this bout with Croom. The 32-year-old American is a well-rounded fighter with solid striking skills, lots of speed, and a dangerous submission game. However, the fact he’s essentially a .500 fighter after all these years shows he is beatable and has holes in his game.

That’s why I still think the underdog Croom has a very good chance to win this fight. In his UFC debut last fall, Croom filled in on 24 hours’ notice and defeated Roosevelt Roberts as a massive underdog +400 underdog, showing off his deadly submission skills. It was an impressive UFC debut for Croom, but he has been on the shelf for the last couple of months after testing positive for marijuana. Now that he’s back in the Octagon, I’m expecting big things from Croom, who is unbeaten in his last four fights. Like Caceres, Croom has holes in his game and his 21-12, 1 NC MMA record is certainly nothing special. But I liked what I saw against Roberts, and I’m going to say he can do the same thing here to Caceres. Give me Kevin Croom to win by submission.

Want to make picks with Adam?

‍Join the #MMATwitter Fanatics group today - it's free and you can compete against hundreds of other MMA fans.