Adam Martin takes a look at the exciting heavyweight prospect Cyril Gane who gets his first UFC main event at UFC Vegas 20 where he faces Jairzinho Rozenstruik. 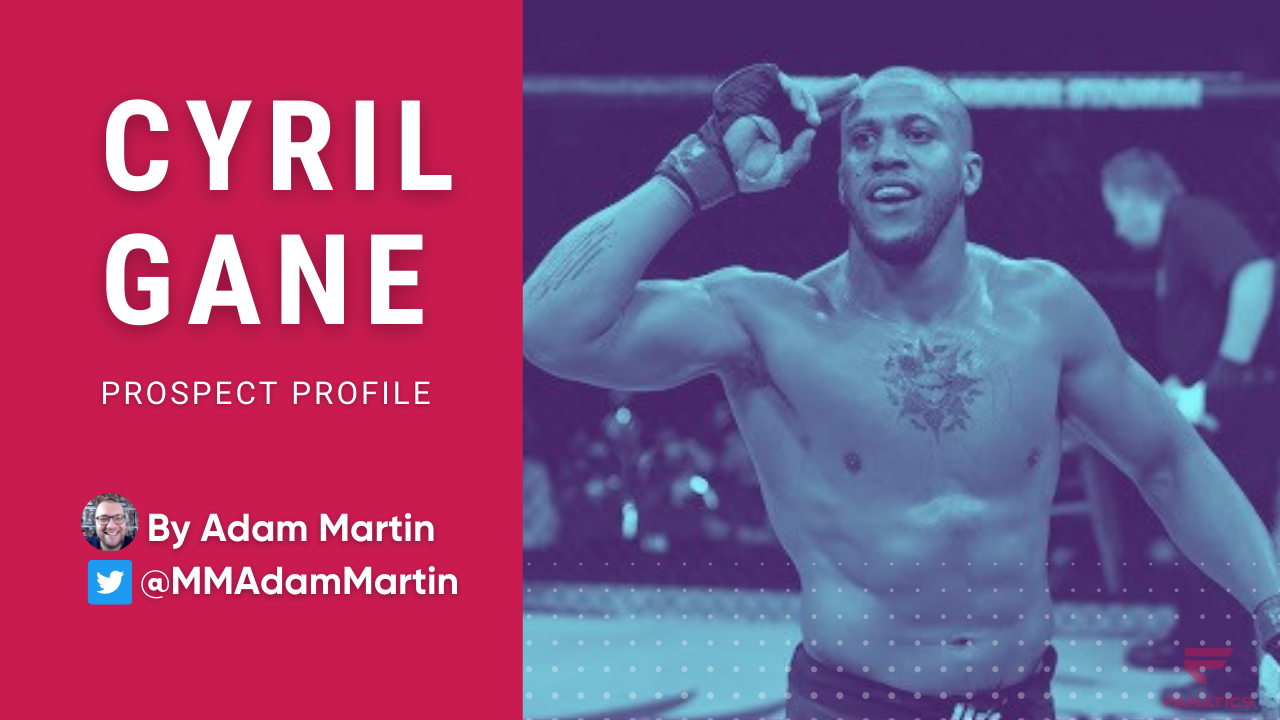 Even before he made his MMA debut in 2018, you just knew Ciryl Gane was going to be something special. Prior to becoming a mixed martial artist, Gane was a successful Muay Thai kickboxer. Between 2016 and 2018, the France native racked up a perfect 7-0 record with five knockouts, turning heads in the process and attracting the interest of MMA promoters. Training under Fernand Lopez at MMA Factory in Paris, alongside former teammate Francis Ngannou, “Bon Gamin” was being prepared to transition into MMA. Gane caught the eye of Stephane Patry, the promoter for the Quebec-based TKO promotion in Canada, and he signed with them.

In August 2018, two months after his final Muay Thai bout, Gane made his MMA debut at TKO Fight Night 1 against Bobby Sullivan for the vacant TKO heavyweight title. To the surprise of many, Gane submitted Sullivan with a first-round front choke. The submission finish showed that he was a complete mixed martial artist and not just a striker. He would then go on to defend his heavyweight crown twice, with a second-round TKO win over Adam Dyczka in September 2018 and a first-round TKO win over Roggers Souza in June 2019, showing off his striking skills in those bouts. Despite having only three professional MMA fights, the UFC matchmakers couldn’t ignore what Gane was doing on the regional scene, and he was signed to the big show.

In August 2019, Gane made his UFC debut and submitted Raphael Pessoa via second-round arm-triangle choke. Once again, Gane showed that he is not just a striker, but a complete MMA fighter. Following that win, he made a quick turnaround to the Octagon in October and submitted DonTale Mayes via third-round submission with a heel hook. You simply do not see heel hooks in the modern-day UFC very often, nevermind at heavyweight. It was an incredible performance by Gane. To cap off what was a brilliant 2019, Gane defeated Tanner Boser via decision just before Christmas, the only time he has gone to the scorecards. Beating Boser was a solid win and would help Gane eventually break into the top-15. But he wanted to break into the top-10.

Unfortunately for Gane, he had a very tough time securing an opponent in 2020. After six MMA fights in his first two years as a professional, Gane would only fight once in 2020 due to a number of opponents pulling out of fights with him. Finally, nearly one year after the Boser fight, we saw Gane return to the Octagon at UFC 256 against Junior dos Santos. In what was a huge step up in competition for the Frenchman, Gane knocked out the former UFC heavyweight champion in the second round with a brutal elbow. It was a career-best victory for Gane, and it catapulted him all the way to No. 7 in the UFC heavyweight division. He returns to the Octagon on February 27 against No. 3 ranked Jairzinho Rozenstruik in what is his first five-round UFC main event. A win here would push Gane closer to the top of the heavyweight division rankings.

It’s absolutely remarkable what Gane has accomplished in less than three years in MMA. The fact he’s already beaten a legend like JDS is huge for him. In many ways, he seems like a natural in this sport. If he goes out there and beats Rozenstruik, it’s possible that Gane could fight for the UFC heavyweight title just three years into his career. Imagine that? It’s already been an absolutely remarkable rise for the Frenchman, and what he’s accomplished is already special. If he goes out there and wins the UFC belt, we might be talking about an all-time great.

If he goes out there and beats Rozenstruik, it’s possible that Gane could fight for the UFC heavyweight title just three years into his career.

No. 7 ranked Ciryl Gane is one of the most well-rounded mixed martial artists in the UFC heavyweight division. The 30-year-old Frenchman is a Muay Thai striker by trade, but since making his UFC debut Gane has shown off an incredibly diverse submission game. Let’s talk about his striking first. Standing 6’4” and weighing in at a svelte 245lbs, Gane is a big man and he packs a lot of power. He also has an 81” reach and it comes in handy as he is a master of controlling the distance with his opponents. If he wants to stay on the outside he can do that, and if he wants to make a move inside he can do that. Going back to his TKO run, you just have to watch the Souza fight to see how devastating his striking is in what was a brutal beatdown in that fight, and his striking has carried over to the UFC. During his UFC career, Gane has landed an above-average 5.61 significant strikes per 15 minutes, with 54% striking accuracy. He’s also very solid in the clinch, showing power with his elbows when he knocked out dos Santos.

Now let’s talk about his ground game, which is truly very special. It’s fun to watch, especially for a heavyweight. Gane took Mayes down three times in their fight and eventually, late in the third round, put him away with a heel hook. It says a lot about his skill on the ground that he was able to pull that submission off. In addition, he was able to get Pessoa down to the mat and finish him with an arm-triangle in his UFC debut. Going back to his TKO days, Gane was able to defeat Sullivan on the ground with a front choke in his MMA debut. He’s shown an incredible variety of submissions from a number of different positions. He has also shown some very punishing ground and pound at times. From a wrestling perspective, Gane is landing 60% of his takedown attempts and he has defended 100% of the takedowns against him. Those are solid numbers, especially for someone who did not come from a traditional grappling background.

The future is bright for Gane. He’s only 30, which makes him one of the youngest heavyweights in the top-15, and he’s already headlining a UFC event. You can tell that UFC president Dana White and the matchmakers are high on him, and he’s getting a shot at a top contender in Jairzinho Rozenstruik. With a win, Gane would become a top-three ranked heavyweight and the possibilities would be endless for him at that point, including a potential title fight before year’s end. It’s been a remarkable rise for Gane already, and it looks like he’s just getting started.