What To Watch For At KSW 59: Fight Code

Polish MMA is back. Take a deep dive into the most exciting matchups this Saturday night. 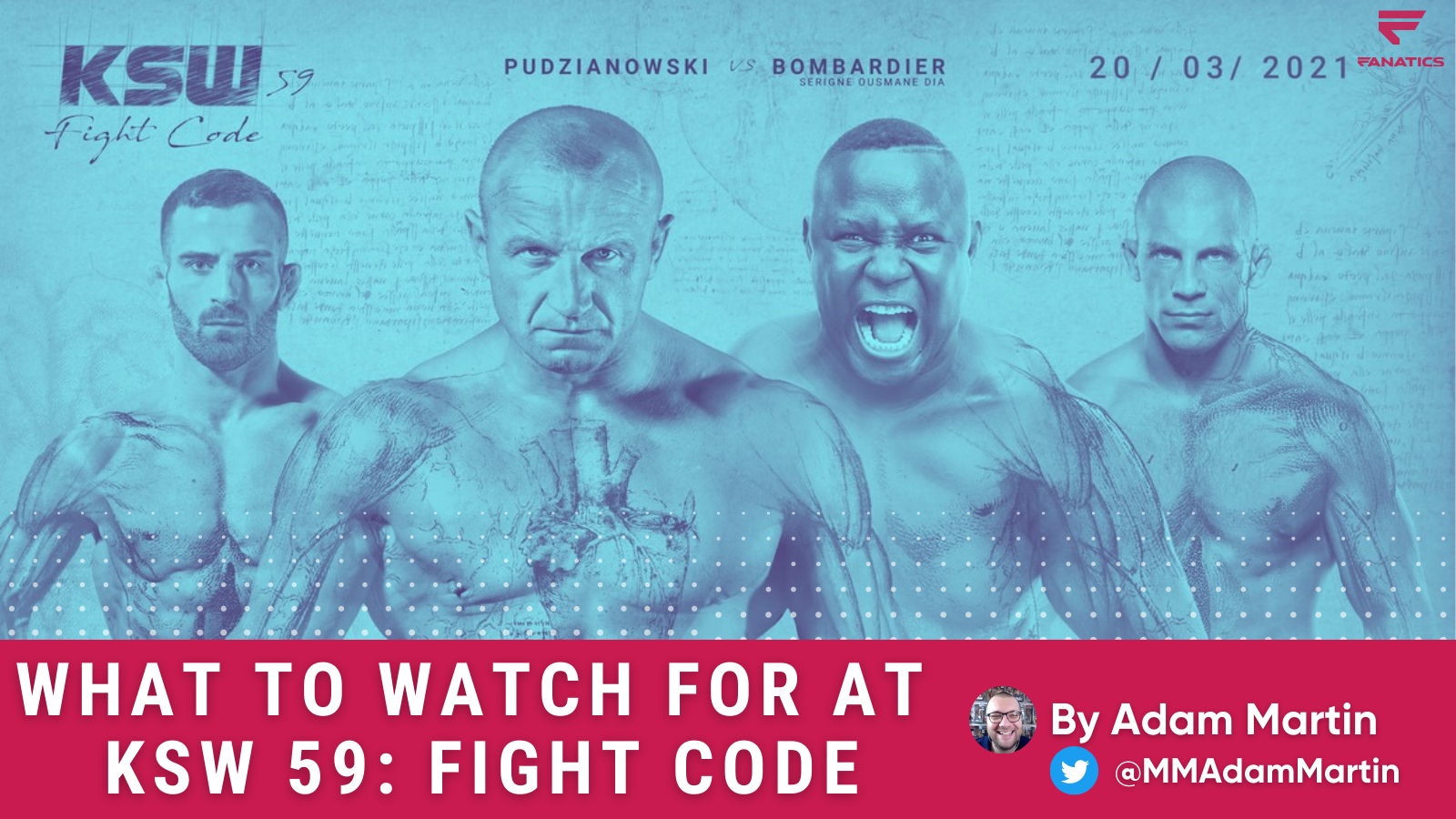 Poland’s leading MMA organization is back this weekend when KSW 59 takes place on Saturday, March 20. Unlike the UFC, which holds fight cards nearly every weekend, KSW generally holds between four and six events a year and they are usually stacked from top to bottom with many of the sport’s top international talent. It’s no different this weekend with KSW 59, which features the return of “The World’s Strongest Man” Mariusz Pudzianowski, who takes on Serigne Ousmane Dia in the main event of the evening between two very large men. With 10 fights scheduled to take place, here are the top things to watch for at Saturday’s KSW 59.

One of Poland’s most popular fighters, Mariusz Pudzianowski (13-7) makes his return to the cage at age 44 when he takes on unbeaten Serigne Ousmane Dia (2-0). “Pudzian” has not fought since December 2019 but the former five-time winner of the “World’s Strongest Man” award is ready to get back into the steel cage and taste victory again. The last time we saw him, he finished Erko Jun in the second round with punches to snap his two-fight losing skid. Dating back to his professional MMA debut in 2009, Pudzianowski has competed in KSW for all of his pro fights save for his third bout against Tim Sylvia in the Moosin promotion. He has notable wins over the likes of Bob Sapp, Butterbean, Oli Thompson, Rolles Gracie, and Sean McCorkle.

Facing off against Pudzianowski in this fight will be Dia, a 44-year-old Senegal native who has just two professional MMA bouts to his name. Despite his advanced age, Dia made his professional MMA debut in 2018 and won that fight before returning in 2020 and picking up a first-round knockout win for his second fight. He hasn’t competed since February 2020, so it will be interesting to see what kind of shape he shows up in for this open weight contest. That’s right -- this fight will be contested at open weight, and that’s because Dia cannot make the 265lbs heavyweight limit. He actually weighs over 300lbs, so he’s technically a super heavyweight. He’s a huge guy with a ton of power, and he’ll certainly have a puncher’s chance in this fight. That being said, Pudzianowski has all the advantages in terms of experience in MMA.

The co-main event of KSW 59 sees KSW bantamweight champion Antun Racic (25-8-1) take on Sebastian Przybysz (7-2). Racic is a 30-year-old native of Croatia who won the vacant KSW 135lbs belt in November 2019 when he defeated former UFC fighter Damian Stasiak via majority decision. He then returned in December 2020 to defend his belt successfully against Bruno Santos. Overall, Racic has won his last seven fights in a row dating back to 2017. The crazy thing is, at that point, he was on a 1-3-1 skid and it looked like MMA might not be his calling. But credit to Racic, who is now a perfect 6-0 in the KSW cage. He’s really turned his career around and now he’s arguably on the verge of joining the UFC with another win. It’s worth noting that most of his recent wins are by decision, so he could use a finish here.

Racic takes on the 27-year-old Przybysz in what is actually a rematch. The Poland native lost the first fight to Racic in December 2018 by unanimous decision but since then Przybysz has won his last three fights to get back into the position of challenging for the title. He’s 4-1 overall in KSW with his only loss coming to the champ Racic, so he is certainly a quality fighter. He’s also more of a finisher when compared to Racic, as Przybysz has scored knockout wins in two of his last three fights. This is another awesome fight on a card that’s full of really intriguing matchups. Racic has the upper hand here given that he’s the champ and he won the first fight, but don’t count out Przybysz from coming away with the win in his bid for the 135lbs belt.

A protege of MMA legend Mirko Cro Cop, Darko Stosic (13-4) returns to the cage for the first time since being released by the UFC when he takes on Michal Wlodarek (8-2). The 29-year-old Serbian was a highly-touted prospect entering the UFC in 2018, and he was victorious in his Octagon debut when he smashed Jeremy Kimball via first-round TKO at UFC Fight Night: Shogun vs. Smith. However, Stosic would then lose three straight decisions to Devin Clark, Kennedy Nzechukwu, and Jamahal Hill, and the promotion decided to release him. The Hill fight was in January 2020, so Stosic will be returning after a long layoff when he steps into the cage.

While he competed at 205lbs in the UFC, Stosic is moving back up to heavyweight for this fight against Wlodarek. It’s worth noting that before entering the UFC, Stosic competed at both light heavyweight and heavyweight, so he has fought up at this weight before. Standing across from him will be the 32-year-old Poland native Wlodarek. He’s a five-fight veteran of KSW, going 3-2 in the promotion including a first-round KO over Srđan Marović in December 2019. Like Stosic, Wlodarek is coming into this fight off of a long layoff, but the KO artist will be looking to get back into the win column here. Regardless of who gets their hands raised, this should be a great fight for as long as it lasts between two guys who will be more than willing to stand and trade.

With 10 fights on the card, there’s a ton to look forward to this Saturday at KSW 59. Enjoy the fights and good luck if you are betting on the bouts!