UFC is back, bring on the daily fantasy MMA!

After a month on hiatus, we’re back with a UFC triple header week with some app updates. 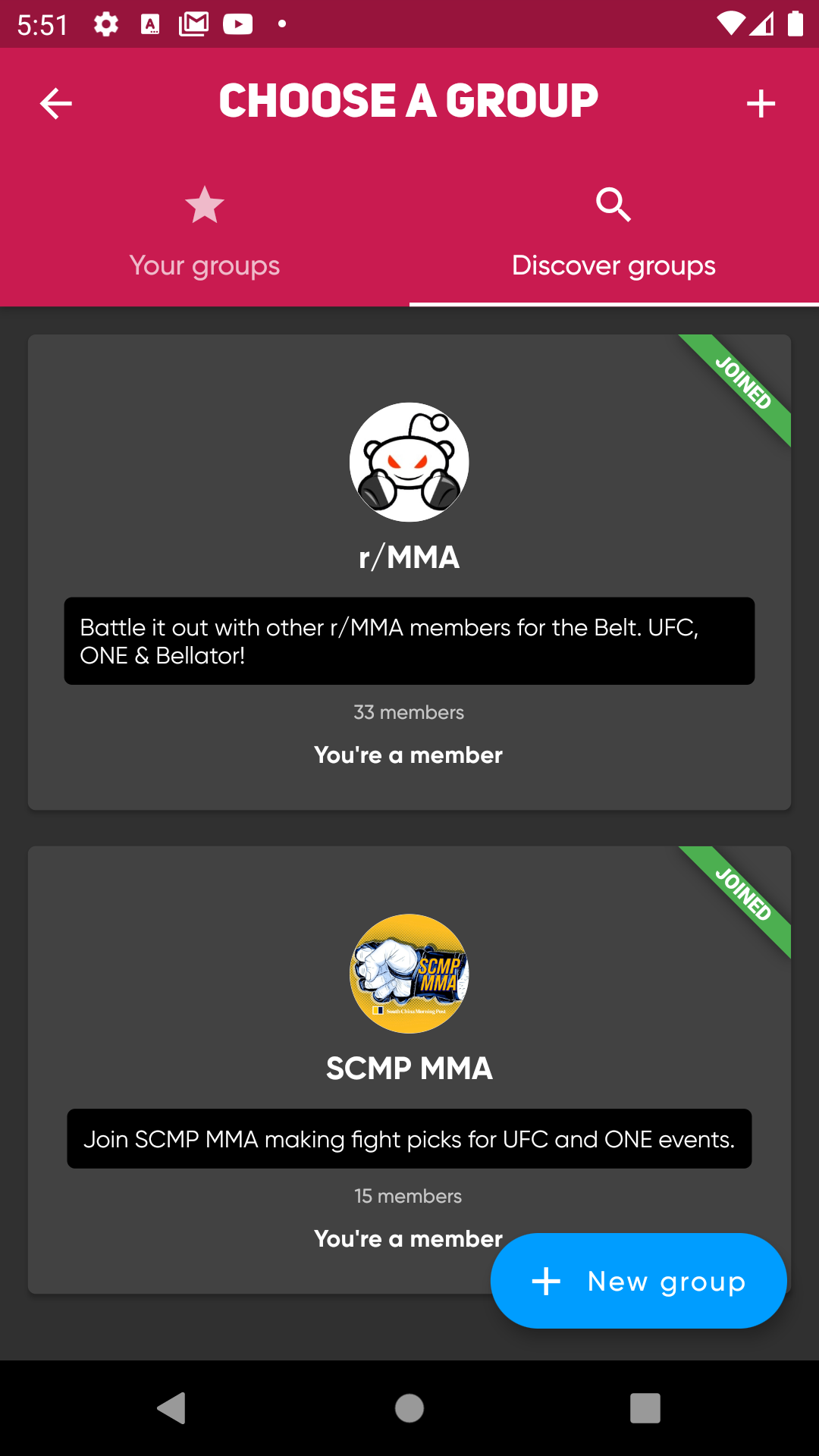 After a month on hiatus, we’re back with a UFC triple header week. We got Holloway vs Kattar, Magny vs Chiesa, and McGregor vs Porier! At Fanatics, we spent the month-off by developing new features for the Fantasy MMA app, based on user requests and feedback. We hope you’ll like them and continue to make your fight picks week to week.

We’ve just launched public MMA Fantasy Fight Groups that allow new and existing users to join groups outside of their own private friend circle. We’re not sure where this feature will end up going, but we’re excited to see what happens next as the groups gain more members by the day.

For starters, anyone can join public groups by clicking into the ‘discover groups’ tab on the ‘Choose a Group” screen of the Fanatics app.

Belt-winners and ‘verified users’ (thanks Twitter) are showcased in the group view for picks, while everyone else’s picks are private. Compare your picks with the so-called ‘fight experts’!

Think you should be one of those verified fight experts? Hit us up in the Contact us page or through the feedback widget in the Fanatics app and tell us why.

We’re starting with our two favourite social networks for MMA - Twitter and Reddit (r/mma). Join the groups now for a better chance to end up as 2021 champion.

Want to be a mod?

Do you have an idea for a public fight group or is your private group getting big? Get in touch with us over on our contact us page and we can convert your group to one that can be discovered by everyone.

Keen to know more about all the matchups and fighters on a fight card? Get invested in the prelims fights by researching fighter backgrounds and records. Click the ‘info’ icon on any given matchup and then dive into each fighter's record and timeline - we curate this information so you don’t have to search the web.

What else do you want to know about fighters that we don’t already show? Please hit us up with your requests!

Want to know who is picking who? See consensus at a glance - compare what the oddsmakers think along with the whole Fanatics user base, and also within your own groups. Want to pick against the grain? Now it’s easy!

Scoring is now done monthly within groups. Every time you become the champion in a group, you keep the belt for life. Collect all the belts and rise above the #casuals!

Want to talk smack in the app, but keep the chaos organised? You can now create threads for your banter. Choose ‘start a thread’ by long-pressing on a message to kick off a new thread.

We’re still optimising our app, and we still have the occasional loading screen that fires up. We made that a little bit more fun by showcasing some ‘wise’ quotes from MMA royalty. “Hey Pussy, are you still there?” - Jon Jones

We’re seeking input from real fight fans, both hardcore and casuals about what we should build next to make Fanatics the best Fantasy MMA app. Hit us up on our r/MMA thread or in our Contact us form with any ideas you might have.

“That’s f***ing illegal” - Dana White. Get it here for iOS and here for Android.