A New Lightweight King Will Be Crowned at UFC 262 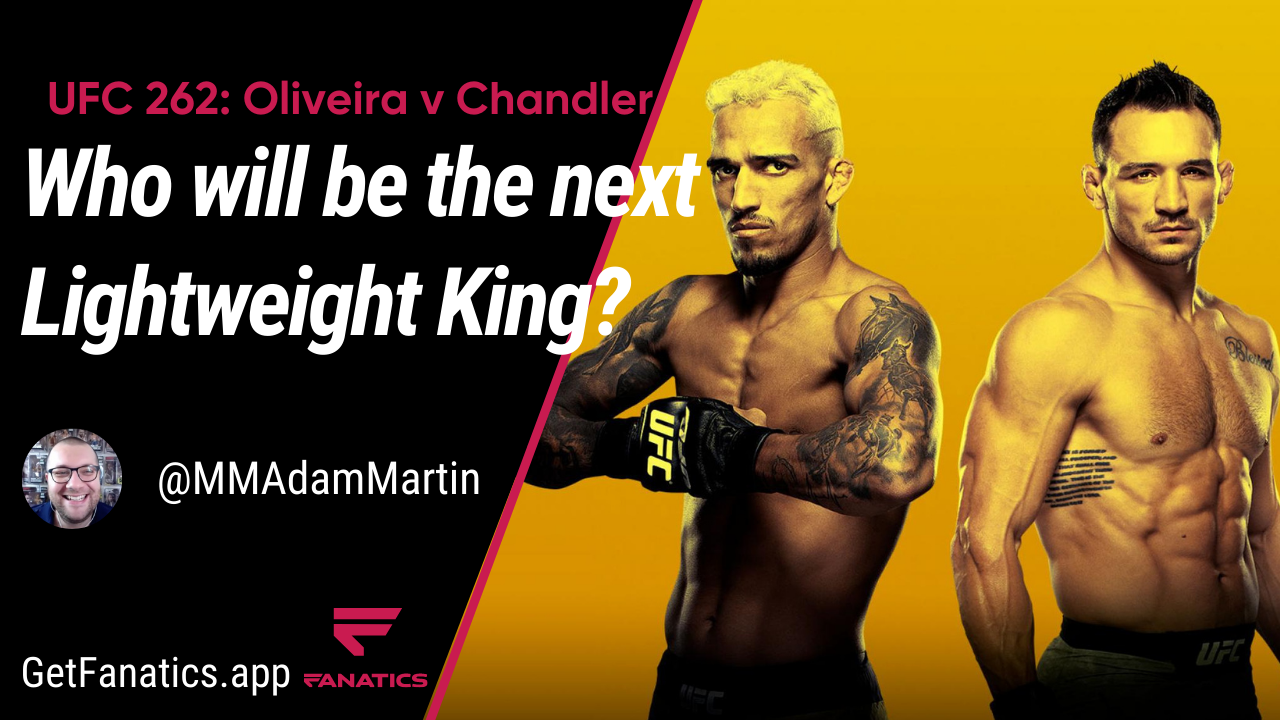 When former UFC lightweight champion Khabib Nurmagomedov announced his official retirement earlier this year, it meant that the 155lbs division would have a fresh start. “The Eagle” dominated everyone in his path to the title and then, once he had it, he defended it three times and made it look easy. In many ways, he was the most dominant champion that MMA has ever seen. There will never be another Nurmagomedov and the sport will miss him a lot. But the UFC continues to truck along, and without a champion, a new vacant title has been created.

This Saturday night at UFC 262, Charles Oliveira and Michael Chandler will battle it out to become the new UFC lightweight champion. For Oliveira, this is the culmination of over a decade fighting in the UFC, while for Chandler, it’s the belt that he’s wanted to fight for all these years, even while he was the three-time Bellator lightweight champion. The UFC championship belt truly shows who the best fighter in the sport is in a certain weight class, and whoever emerges victorious from Oliveira and Chandler will be crowned the new king of 155lbs.

Starting with Oliveira, it has been truly amazing to see him evolve as a mixed martial artist over the years. It was just over 10 years ago that Oliveira was getting kneebarred by Jim Miller and you really had no idea how his career would go after that. Over the years, he battled all sorts of inconsistency and was accused of being a “quitter” in several fights where he was stopped. But Oliveira persevered and made it to the top. Now, he is the record holder for the most submission wins in UFC history. It’s truly been a remarkable turnaround for Oliveira, who appeared to be destined for gatekeeper status. We now know that he’s a contender and close to being champ.

After years of fighting at 145lbs and hurting his body to make the weight, Oliveira moved back up to his original weight class of 155lbs four years and hasn’t looked back, as he’s won his last eight fights in a row. Not only has Oliveira been winning his fights, but he’s been dominating his opponents and breaking them. We have seen so many improvements in his game, but especially in the striking, as he now has knockout power to add to his slick submissions. Overall he is just an incredible talent and it feels like he’s been a hidden gem for all of these years. We are finally starting to see Oliveira unleash his true potential and it’s been a lot of fun to watch.

In his last outing, Oliveira completely wiped out former top contender Tony Ferguson to pick up the biggest win of his career to date. If you had question marks about Oliveira when he was beating guys like Jared Gordon and Nik Lentz, those questions were answered when he smashed Ferguson. By going in there and pitching a shutout with “El Cucuy,” it showed that Oliveira truly is an elite lightweight and that he’s ready to fight for the belt. He wanted Nurmagomedov, but he’ll instead have to settle for Chandler instead, and while Chandler may not be a legend like Nurmagomedov, he’s a great fighter and a tough test for Oliveira.

Chandler was the three-time Bellator lightweight champion and for the better part of the past decade he was that promotion’s top star. However, his goal was always to make it to the UFC one day, and after stopping Benson Henderson and Sidney Outlaw in his last two Bellator fights, Chandler signed a free agent deal with the world’s leading MMA promotion. He had a successful debut when he knocked out Dan Hooker at UFC 257 in January, and that win was enough to earn him a vacant title shot against Oliveira. UFC president Dana White really liked what he saw from Chandler in that fight and he decided to reward him with the title shot.

Against Hooker, we saw Chandler’s trademark KO power as he landed a huge left hook and then followed it up with ground and pound for the first-round win. Chandler has been doing this for years in Bellator, just smoking his opponents and making it look easy. Like Oliveira, Chandler’s suffered some bad losses over the years, like his defeats to Will Brooks, but like his opponent at UFC 262, Chandler has persevered and made it to the top of the sport. On Saturday night, he’ll look to join Eddie Alvarez as a UFC and Bellator lightweight champion.

This is going to be one exceptional fight for the vacant lightweight title. Both Oliveira and Chandler are at the top of their games right now and both men are prepared to go in there and win the belt this weekend. Oliveira has been looking like a world beater for several years now and he will get the opportunity to show that he’s the best in the world, while for Chandler it’s a chance to show that he’s been one of the best lightweights in the world for years and still is. UFC 262 lost some star power when Nate Diaz and Leon Edwards were moved to UFC 263, but thankfully, we still have this incredible main event between Oliveira and Chandler to watch, a headlining fight where we will see a new king crowned in the UFC lightweight division.

Who ya got? Oliveira vs. Chandler