Who's taking home the belts this weekend? My 5-fight forecast. 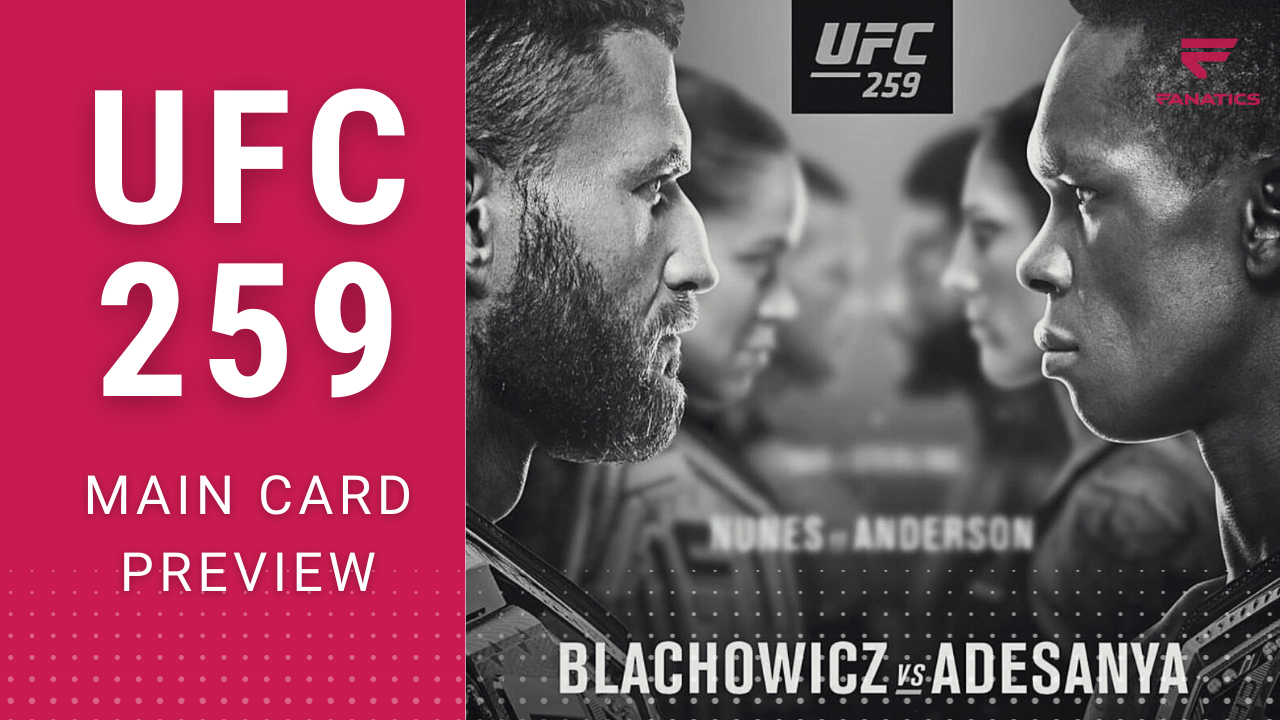 MMA in March starts off with bang at a UFC 259. The main card is headlined by 3 title fights and we’re here to break it all down for you.

Polish Power comes up against The Last Stylebender in his first Light Heavyweight title defence. Jan sits as the underdog in this fight at +195, not unfamiliar territory. In his last 9 fights, he’s been the underdog 7 times. Of those 7, Jan has beaten the odds 6 times. The man is constantly counted out and consistently rises to the occasion. Will he be able to pull it off again against Adesanya?

Israel Adesanya is coming up to Light Heavyweight after his last Middleweight title defense where he put on a masterclass against Paulo Costa. After a somewhat lackluster showing against Yoel Romero, Izzy set out to show the world that he is on another level in the striking department and decimated Costa over the course of 2 rounds on to an emphatic TKO. Israel is a rather large favourite in this match, a rare sight when jumping weight classes. The odds are a byproduct of Izzy’s current 20-fight win streak, his striking acumen and kickboxing history against other large opponents. Many in the know think that Blachowicz’s style of striking will feed into Izzy’s skill set, and considering Jan’s TKO loss to the talented but less polished Thiago Santos, Adesanya’s striking might be too much for the Polish champ. The size disparity between the two actually favour’s Izzy on paper, but I think that Jan will be the thinker of the 2 on fight night. Whether he can put that size and power to use against Izzy’s potent offense and defense is the question at hand, and I don’t see it happening.

My pick: Adesanya by TKO, round 2.

Amanda Nunes makes her second defense of her Featherweight title against Megan Anderson. The double-champ is the biggest favourite on the card and is all but expected to run through Anderson. Does Megan pose any sort of threat to the champ? I don’t think so. Nunes has looked near unstoppable since her last loss to Cat Zingano in 2014. Unbeaten in over 6 years! She’s currently on track to set a champ status rivaling UFC greats like Anderson Silva, George St. Pierre, and Jon Jones.

Megan is a solid challenge for Amanda, but beyond her size (6’ 0” tall in WMMA is rare) and durability, I don’t see any way for her to win. She’s got a string of TKO’s and submissions over the course of her career, so her finishing ability is unquestionable, but I don’t see her competing well in the space of utter violence against Nunes.

Petr Yan makes his first title defence against #1 ranked Aljamain Sterling in what should be a barnburner of a fight. Yan is currently riding a 10-fight winning streak dating back to 2016, during which he avenged his only loss in ACB to Magomed Magomedov. Since then, he’s looked uber dangerous in every outing. He carries potent power in his hands and feet, strong boxing fundamentals, and a lethal wrestling ability he can pull out whenever needed.

Before the pandemic, Yan had been training primarily with the Tiger Muay Thai team out in Phuket, Thailand. For those that don’t know, Tiger isn’t just a Muay Thai gym, but one of the most packed MMA gyms in terms of talent coming from the Caucasus region of Russia. The endless stream of training partners and insane talent pool has no doubt enhanced the combat acumen of Yan over the course of his time there. Training at Tiger was not an option for Petr this time around and it may be the only hurdle for him I see in this fight. Is he as prepared without the varying stream of bodies to work with? We’ll find out this weekend.

Aljamain is going to be Yan’s toughest test to date. A lot of hype is coming in on Sterling due to his last win over Cory Sanhagen (Round 1 RNC). A win that has aged well since Sandhagen’s own impressive finishes over Marlon Moraes and Frankie Edgar. Aljamain would be wise to use his reach advantage and keep Yan on the outside, while choosing to crash the pocket on his own terms to enter grappling exchanges. I believe Yan’s slightly shorter reach will be a rare advantage in this fight. Yan’s best work will come in mid and close range exchanges. In spaces where Sterling’s length is negated, Yan will look to land clean and hard while also engaging in the grappling on his own terms. I see Yan putting up a stifling fight for Aljamain’s skillset that will likely go the distance.

My pick: Yan by decision.

Lighweight prospect Islam Makhachev takes on #15 ranked Drew Dober in what should be a career defining test for Khabib’s AKA and Eagles MMA teammate. Drew Dober is riding a 3-fight win streak with consecutive KOs/TKOs. His last loss to thriving veteran Beneil Dariush (Round 2 Submission) gives me some pause to pick the upset here. Dober’s last 3 losses have been by submission, and while he is no slouch in the wrestling department, Makhachev’s grappling is far too big of a threat to pick against him. After a rough KO loss to Adriano Marins in his second UFC fight in 2015, Islam looks like he has dialed it in and might end up picking up the Dagestani lightweight torch that Nurmagomedov has put down.

My pick: Islam Makhaachev by Submission

#2 ranked Thaigo Santos will take on surging #4 ranked Aleksandar Rakic. Never to be counted out, Santos had a tough showing losing by 3rd round RNC against Glover Texeira in November 2020. After his previous performance against Jon Jones, which many pundits and fans felt Santos won (despite injuring both knees during the bout), many thought Thaigo would become the de facto #1 contender for the Light Heavyweight strap. But the MMA gods laugh at us mere mortals. Thaigo's last win was a TKO against the current champ, and all signs point to a rematch should they both come out victorious at UFC 259.

Aleksandar comes into this bout with a record of 13-2. He dropped a recent bout to Volkan Oezdemir by split decision in December of 2019. Previous to that he was riding a 12-fight win streak with 9 of those wins coming by KO/TKO, and after his last win over Anthony Smith, Rakic looks like he’s back on track and has his eyes on the belt.

Light Heavyweight has always had more of a rock-paper-scissors effect than other divisions, and while it might be smart to think Santos is heading towards the downslope of his career, I get the feeling that an upset is on the way.

My pick: Thaigo Santos by TKO