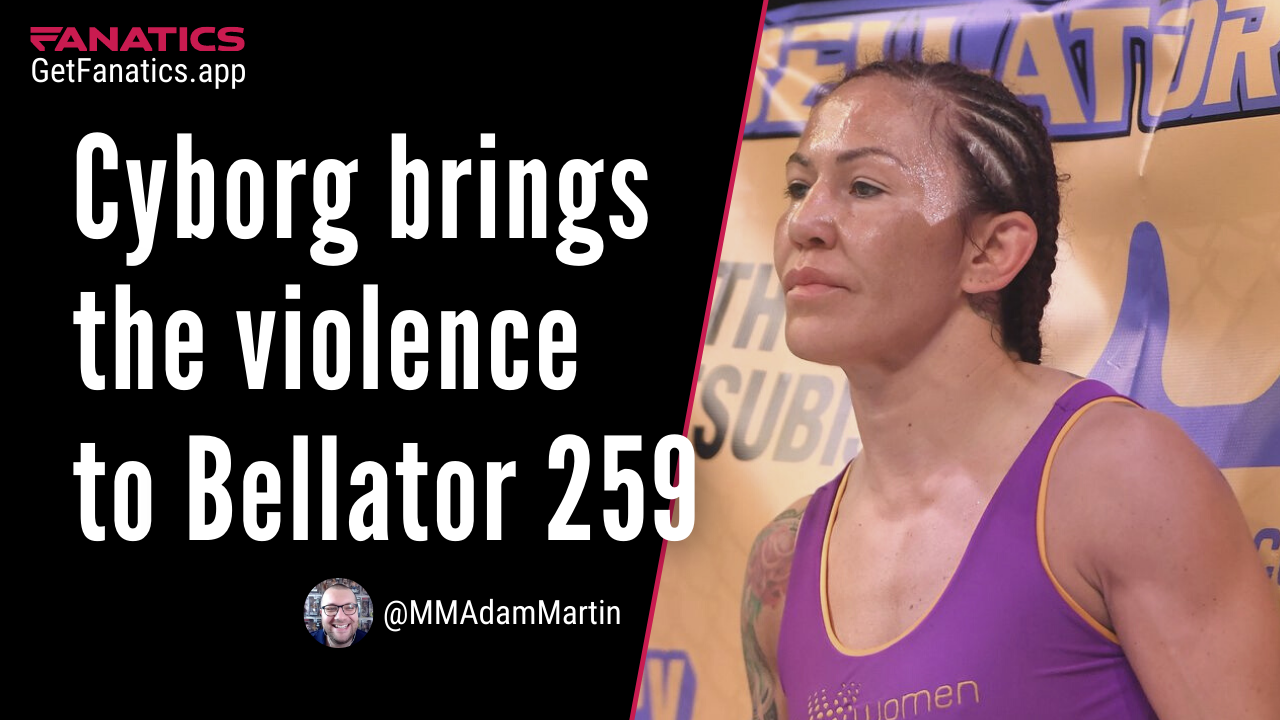 This Friday night, one of the most dominant women’s MMA fighters of all time returns to the cage when Cris Cyborg takes on Leslie Smith in the main event of Bellator 259. It’s a rematch between the two veterans, who previously met at UFC 198 in 2016, with Cyborg finishing Smith in the first round of that fight. Five years later they meet again, this time in Bellator with Cyborg’s women’s featherweight title on the line. Despite Cyborg being one of the most accomplished MMA fighters of all time, it feels like her return is flying under the radar. So let’s change that.

Just because Cyborg isn’t in the UFC anymore doesn’t mean she’s washed up at age 35. Yes, she did lose to Amanda Nunes and lost the UFC women’s featherweight title when she was knocked out in one of the craziest one-minute fights ever, but she bounced back in impressive fashion against Felicia Spencer her next fight. After that bout, Cyborg got into a public dispute with UFC president Dana White about a potential rematch with Nunes. White said that Cyborg was ducking Nunes, despite Cyborg saying she wanted to take the fight. In the end, White said he couldn’t work with Cyborg anymore and cut her. Bellator quickly scooped her up.

In January 2020, Cyborg made her Bellator debut and she won the promotion’s 145lbs belt when she smashed Julia Budd, who is an excellent fighter in her own right. That was an impressive win for Cyborg and it shows that she still has what it takes to be an elite fighter in the division. In her return to the cage in October 200, Cyborg finished Arlene Blencowe by submission. She has looked phenomenal in Bellator, but because she isn’t in the UFC anymore she isn’t getting as much respect as she should be. Cyborg is still an elite talent, and the fact she is a -1000 favorite to beat Smith this weekend shows the oddsmakers know she’s still elite.

This fight seems like a mismatch just based on those odds and the fact Cyborg already stopped Smith once, but when you look closer at this fight, it could be a bit more competitive than some think. Smith has actually been on a nice roll as of late, having gone 4-1 since losing to Cyborg with notable wins over Irene Aldana and Amanda Lemos in the UFC. Both of those women are top-15 ranked fighters in the UFC right now so the fact that Smith has beaten them recently is being slept on. Since going to Bellator, she has wins over Sinead Kavanagh and Amanda Bell with a loss to the aforementioned Blencowe. Smith is in good form right now and she might be able to be a bit more durable this time around. It’s totally understandable to see Cyborg as the favorite in this fight, but don’t sell Smith short. She’s a veteran and deserves your respect, too.

This fight against Smith this weekend seems like a blowout based on the odds, but if you enjoy MMA you will probably enjoy the violence and entertainment this fight brings.

Ultimately, this looks like another showcase bout for Cyborg, and that’s always must-watch TV. For years, Cyborg has been putting on amazing fights for the fans. At 23-2, she has one of the best records ever for a women’s fighter and she has proven her dominance over the years with so many big fights. The problem for Bellator right now is finding competition for her. Really, it feels like the only women’s featherweight who would give her problems is Amanda Nunes and potentially Kayla Harrison in the future. Bellator doesn’t have either of those fighters on its roster, so right now they are just trying to find women who are willing to step into the cage with her. Smith is as tough as she comes and she answered the call when Bellator asked her to. But if you trust the odds, this looks like it might be another dominant win for the champion Cyborg.

Not only is Cyborg’s return floating under the radar, but I feel like this whole Bellator 259 card in general is. The co-main event for the card features former Bellator bantamweight champion Darrion Caldwell against Leandro Higo, another longtime veteran of the promotion. Caldwell lost in his run in the Bellator World Featherweight Grand Prix to top prospect AJ McKee Jr., but there’s no shame in that at all, and before that he beat Adam Borics and Henry Corrales. Those are quality wins, and Caldwell is a quality fight. His opponent in this one Higo is coming off of back-to-back wins and for years has been one of the more underrated fighters in the division.

This should definitely be a good scrap for as long as it lasts between these two bantamweights. A middleweight bout between Austin Vanderford and Fabian Edwards is also very intriguing.

There is so much quality MMA going on these days. While it’s true that the UFC is still the pinnacle of the sport, Bellator puts on great shows as well. Just because a fighter isn’t in the UFC anymore doesn’t mean that they don’t have the skills to be the best in the game anymore. If Cyborg was still in the UFC, she would likely be fighting Amanda Nunes right now. She’s still one of the best in the world and deserves more appreciation for everything she’s accomplished in her career. This fight against Smith this weekend seems like a blowout based on the odds, but if you enjoy MMA you will probably enjoy the violence and entertainment this fight brings.