Adam Martin goes deep on the Miocic vs Ngannou matchup, looking at the different aspects of mixed martial arts and comparing the two men skill-for-skill. 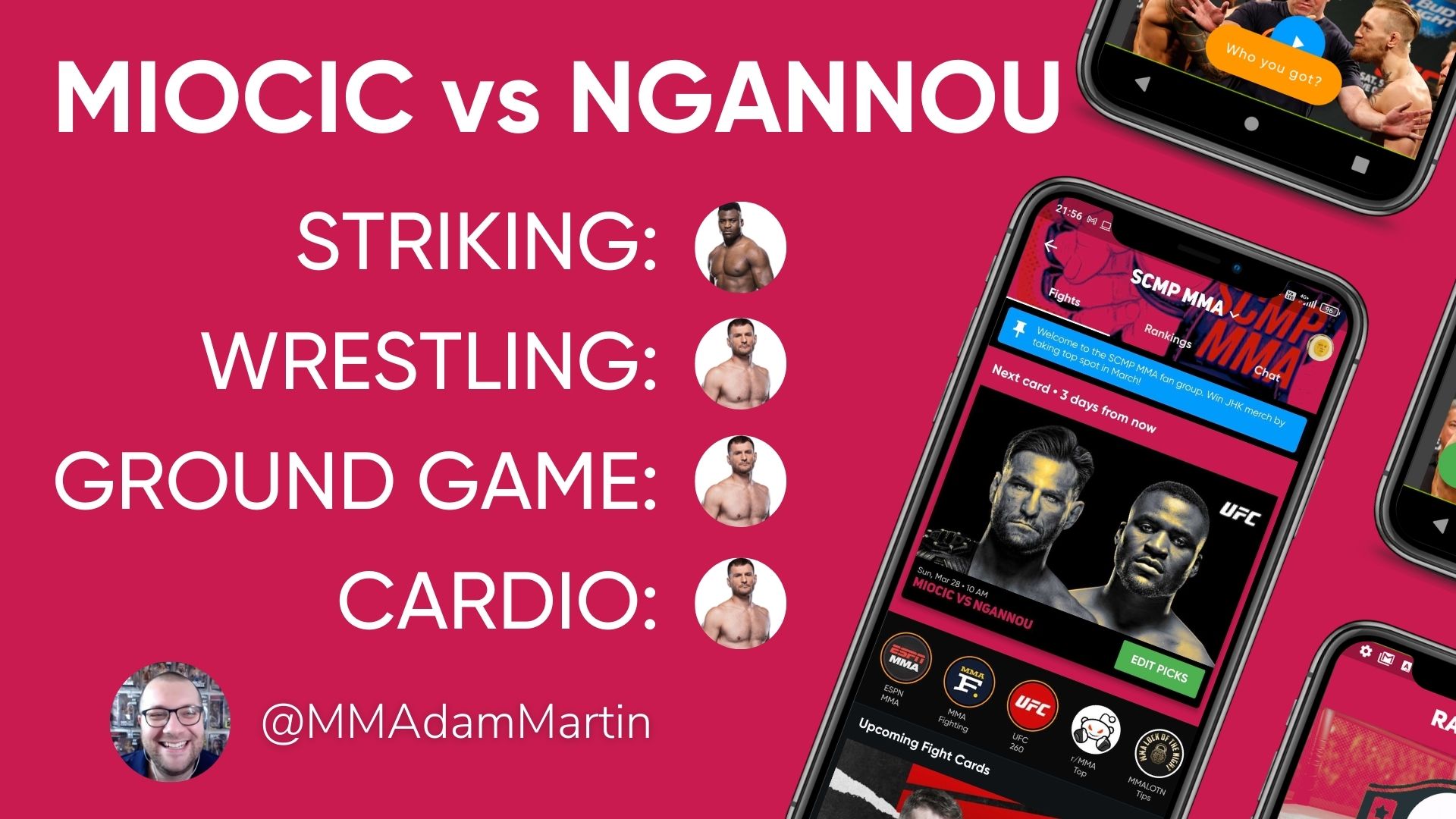 The UFC heavyweight title is on the line this Saturday night at UFC 260 when Stipe Miocic takes on Francis Ngannou in a rematch between the sport’s two top big men. The first time these two met back at UFC 220 in January 2018, Miocic defeated Ngannou via unanimous decision. “The Predator” has worked hard to make it back to the position of challenging for the belt again, and he’ll get the opportunity this weekend in Las Vegas when he faces Miocic again. It’s a fascinating matchup between two incredible fighters, and it’s a tough one to predict. The betting odds appear to be mostly even, with a slight lean towards the powerful Ngannou. It’s a fight where you’ll see plenty of people on both sides of the coin, and that’s for good reason.

Both Miocic and Ngannou are elite heavyweights in their own ways. Below, I’ll go through the different aspects of mixed martial arts and compare the two men skill-for-skill. We’ll go through the striking, the wrestling, the ground game, and the cardio of both men. This is going to be an incredible title fight, so buckle up as we take a deeper look at comparison their skill sets.

Both fighters excel in the striking department but in very different ways. Starting with Miocic, he’s much more technical with his striking. Miocic has excellent boxing technique and is able to land straight punches down the pipe. He also packs a ton of power in his punches. The best thing about Miocic’s striking attack is the volume. He keeps moving forward and can throw multiple-punch combinations. It’s led to him knocking out a number of the best heavyweights.

As for Ngannou, his standup is also his best attribute, but he’s a different kind of striker than Miocic is. Ngannou is basically a home-run hitter with his shots. He has absolutely massive power but he really loads up on his shots. He has huge hooks and uppercuts and can wing them from tight spaces. Defensively, Ngannou is hard to hit, but that’s because he rarely gives his opponents the chance to -- almost all of his finishes in the UFC have come in the first round.

Miocic is definitely the better wrestler in this fight. We’ve seen him throughout his career revert to his wrestling when he didn’t want to stand and trade with power punches. That’s how he beat Mark Hunt and that’s how he beat Ngannou, by using his wrestling to dictate where the fight takes place. Make no mistake about it, Miocic wants to stand and trade. But if the opportunity calls for him to take the fight to the ground, then he will wrestle his opponent to the mat.

As for Ngannou, his offensive wrestling is pretty much non-existent as he’s never completed a takedown in the UFC. Of course, he doesn’t have to when he keeps his fights standing and knocks his opponents out in the first round. On the other side of the coin, we saw his defensive wrestling was a big issue in the first fight. That was a big hole in Ngannou’s game that Miocic was able to exploit, and three years later, you’d hope that Ngannou has cleaned up his TDD.

Incredible, Miocic has never actually finished a fight by submission in mixed martial arts. He hasn’t had to, as his striking is usually enough to get the job done. But in the few cases where he did take his opponents to the ground, such as when he fought Hunt, we saw his nasty ground and pound. We also saw it when he smashed the late Shane Del Rosario. It would be nice to see Miocic score his first submission one day, but so far, he hasn’t needed to do so.

As for Ngannou, he does have four submission wins in his MMA career, including a kimura victory over Anthony Hamilton in the UFC. In that fight, Ngannou essentially used his brute strength to whip his opponent to the mat and immediately tap him out. He also had several submission wins in Europe before he joined the UFC. I’d like to imagine that Ngannou would have some tremendous ground and pound, too, but thus far we haven’t seen that from him.

You would have to favor Miocic in the cardio department for a few reasons. First off, we all saw the first fight and we know that he has the gas tank to go 25 minutes. Not only did Miocic go the full five rounds against Ngannou, but he never stopped working the entire time. It was the same thing in his last fight against Cormier, where he went five rounds and was still fighting hard until the final bell. Miocic has gone a full five rounds several times in the UFC and his cardio is king.

As for Ngannou, this is arguably one area of weakness in his game. Against Miocic in the first fight, we really saw “The Predator” slow as the fight went on. Overall, he doesn’t really go past the first or second round very often, but from what we did see against Miocic, Ngannou doesn’t have great cardio. He will probably have two rounds to land the knockout blow against Miocic, and if he doesn’t then, the champion’s cardio becomes a huge weapon in the later rounds.

It goes without saying this is not an easy fight to predict given that both men have a clear path to victory here. I do believe that Miocic is the more well-rounded and complete mixed martial artist, with his biggest edges being in this fight will be in grappling and cardio. If he can utilize those two weapons in this rematch, just like he did the first time, then he can retain his belt.

I’m not selling Miocic’s striking short, as I think technically he is the better striker, but the power of Ngannou is just something that’s hard to compete with. Miocic fought a smart fight the first time around and got his hand raised without taking much damage, but three years later, it’s a different fight. I respect Miocic’s game, but you simply can’t ignore Ngannou’s power.

Just as the betting odds suggest, I give a slight edge to Ngannou to become the new UFC heavyweight champion, but either way, this is a great matchup between two elite heavyweights.