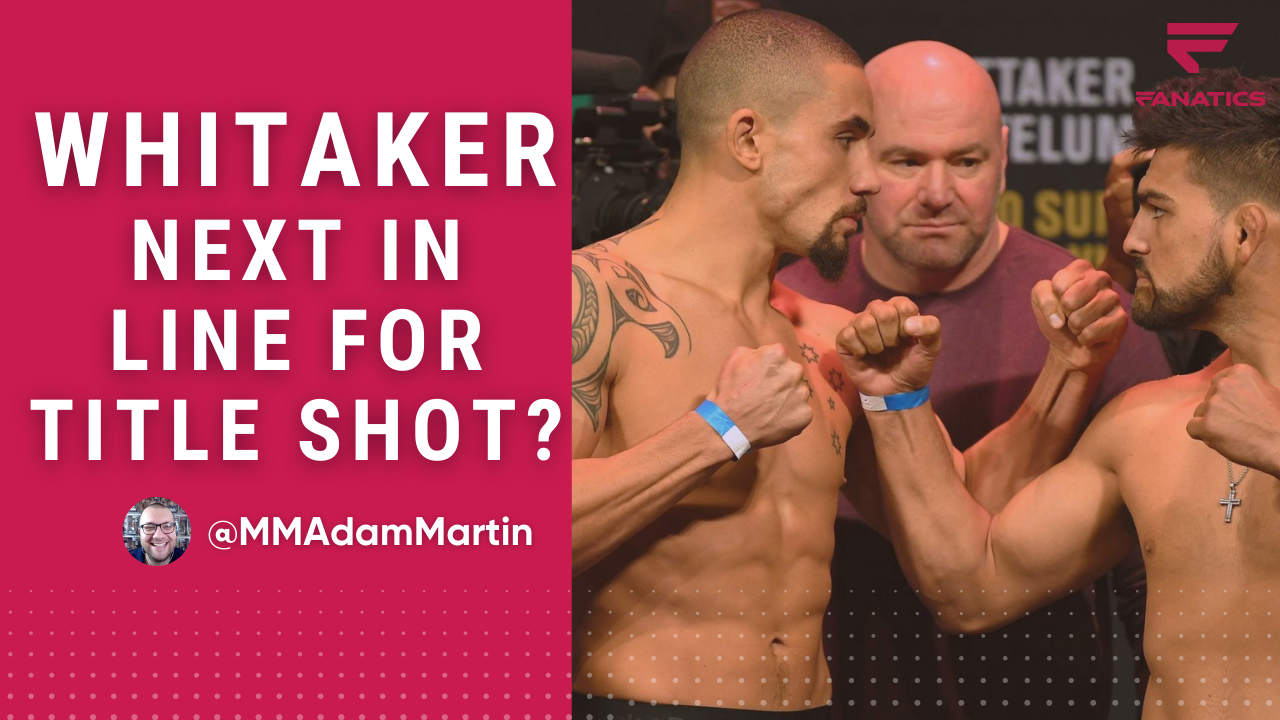 The next title shot against UFC middleweight champion Israel Adesanya could very well be up for grabs this weekend when Robert Whittaker meets Kelvin Gastelum in the main event of UFC Vegas 24. Whittaker is the No. 1 contender in the UFC middleweight division, while Gastelum is No. 8. It would stand to make sense that Whittaker should get the next title shot just based on his standing in the division, while an upset win for Gastelum could shoot him into that No. 1 contender spot himself. But it’s not so easy, as there are other moving parts at play here.

On the surface, Whittaker deserves to fight for the belt if he can get by Gastelum this Saturday. After all, the Aussie has won his last two fights in a row over Darren Till and Jared Cannonier as he’s bounced back nicely from losing his belt to Adesanya in 2019. Here’s the problem. When Whittaker defeated Cannonier at UFC 254, however, he didn’t immediately call for a title shot against Adesanya, who had just defended his belt against Paulo Costa at UFC 254. Instead, Whittaker said that he wanted to take some time off and spend the holidays with his family.

When that happened, UFC president Dana White decided to make a move and book Adesanya up a weight class against UFC light heavyweight champion Jan Blachowicz. When that happened the promotion pivoted to booking Whittaker against Costa instead. It seems as though the UFC is not completely sold on giving Whittaker this title shot and is open to seeing what else happens in the division. If they were truly sold on him as the No. 1 contender, the promotion could have had Whittaker sit on the sidelines as Teixeira did at light heavyweight.

Instead, the promotion decided to tell Whittaker to take another fight in the meantime, despite the fact that he’s a former champion who should have probably already earned the title shot already. That says to me that the UFC was looking at other possibilities depending on how the fights go. Namely, Marvin Vettori beating Kevin Holland at UFC Vegas 23 last week. Vettori has won five straight fights and is also the holder of a split decision loss to Adesanya, which was the toughest fight he has ever had at 185lbs. As good as Whittaker is against everyone else, Adesanya made it look easy. Vettori, on the other hand, gave Adesanya a tougher fight.

Stylistically, nothing has changed from the first time that Whittaker and Adesanya fought. They are both strikers and Adesanya still has a much longer reach. It’s not like Whittaker’s chin has gotten any better, either, as he was hurt badly in the Cannonier fight, although he held on to win. He is a fantastic fighter, but the way to beat Adesanya is clearly in the grappling department. Blachowicz showed the blueprint on how to defeat the UFC middleweight champion and Vettori is the fighter at 185lbs best suited to implement that same sort of grappling-heavy gameplan. So if the UFC is looking for the toughest fight for Adesanya, right now it’s actually probably Vettori.

Then again, maybe the UFC doesn’t want to put Adesanya back in there with another grappling-heavy fighter, and that’s why Whittaker has such a big opportunity this weekend when he fights Gastelum. Whittaker can go in there and put on a great fight and leave no doubt that he’s the No. 1 contender, especially with a big knockout win. If Whittaker can go in there and finish Gastelum, that would give him the ammunition he needs to go to White and the rest of the UFC brass and say, ‘I’m next for the belt.’ I’m honestly not sure if just outpointing Gastelum and winning a decision is going to be enough for Whittaker to get the title shot. But if he can go in there and put on a vintage performance and get a knockout, it would give him a better chance

There’s a lot of pressure on Whittaker this weekend, but it’s not like he hasn’t been here before. He’s been a UFC champion and has defended his belt multiple times, so he knows what pressure feels like. This time, though, it’s different. This is a must-win fight for him, and he has to look impressive if the title shot is the goal. With so many other great fighters at middleweight and with so many guys looking for a title shot with Adesanya, you have to keep winning, because a loss can drop you right out of title contention. Whittaker has to win this weekend, there’s no doubt about it. And he has to look good in doing so just to strengthen his argument.

If I’m a betting man, and you know I am, Whittaker should get the job done this weekend. He’s been one of the best in the world at 185lbs for years and, unlike Gastelum who took the fight on short notice, Whittaker had a full training camp for this fight. After beating Holland last weekend, Vettori questioned how bad Whittaker wants this title shot and how hungry he is. If Whittaker truly is as hungry as a title contender should be, then we will see it on full display this weekend against Gastelum. On paper, he matches very well with Gastelum. If Whittaker’s goal is to reclaim the UFC middleweight title, then he will go in there and get a finish, to leave no doubt.