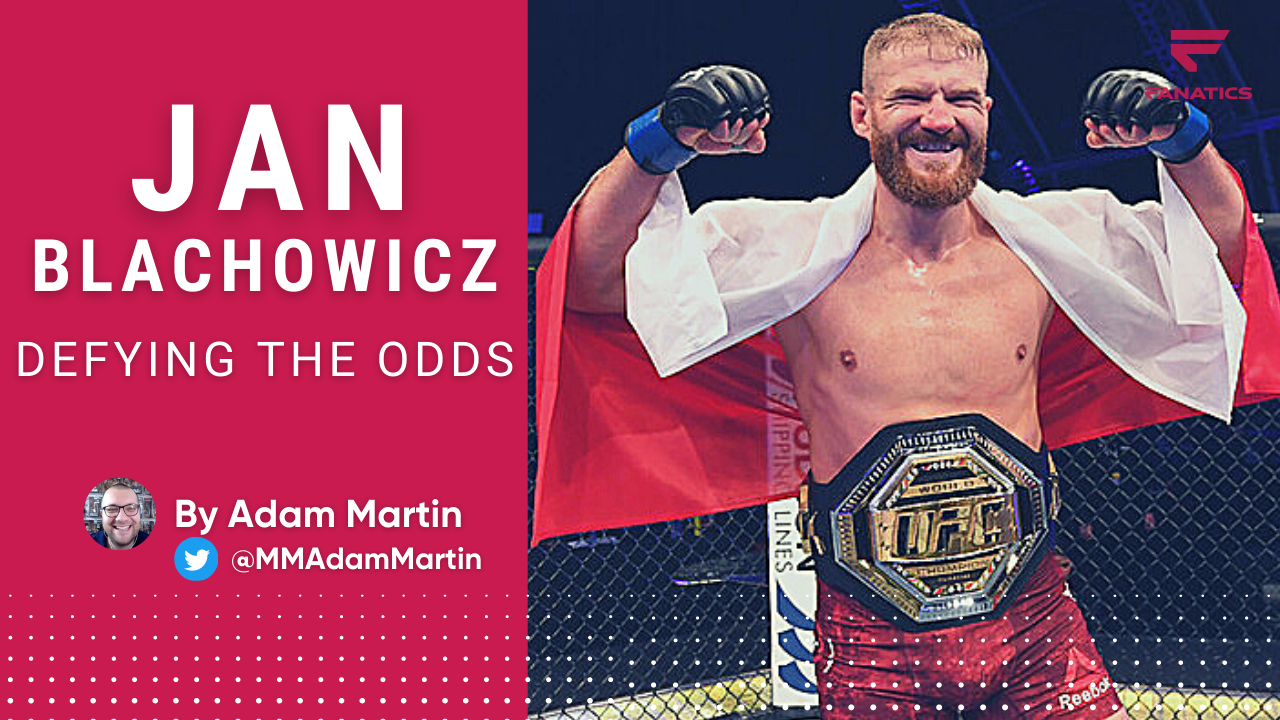 Heading into his championship fight this weekend in the main event of UFC 259, UFC light heavyweight champion Jan Blachowicz is once again being overlooked. The 38-year-old Poland native is playing second fiddle to his opponent on Saturday night, MMA superstar Israel Adesanya. It’s a role all too familiar for Blachowicz, who finds himself as a +200 underdog this weekend against Adesanya despite the fact it’s he who currently wears the gold around his waist. But while the general public may not give him the credit he deserves, we certainly will.

Blachowicz has fought 15 times in the UFC, and he was the underdog in 12 of those fights. Out of those 12 fights where he was the underdog, Blachowicz won eight times, which is a 75% winning percentage when he’s available at plus-money odds. That’s a pretty incredible statistic, and something to keep in mind this weekend against Adesanya, where he is once against the underdog. Despite the fact Blachowicz has proven himself to be an elite fighter and a world champion, he continually gets overlooked and underappreciated, and that needs to change.

Looking at Blachowicz’s MMA career as a whole, it’s outstanding to look back at for a number of reasons. Growing up with a judo background, Blachowicz transitioned to mixed martial arts in 2007. When he was 24 years old, he made his MMA debut and quickly won a one-night tournament for KSW. It was in KSW where Blachowicz would hone his skills and become a world champion for the first time. After going 17-3 fighting in KSW and on the European regional scene, Blachowicz attracted the attention of the UFC matchmakers. He decided to vacate his KSW belt and soon after signed a contract with the world’s leading MMA promotion.

In October 2014, Blachowicz made his UFC debut when he took on Ilir Latifi in Sweden. Despite entering the bout as a +245 underdog, the Pole knocked the Swede out with a body kick and punches to collect his first UFC victory. However, Blachowicz would taste defeat when he lost back-to-back fights to Jimi Manuwa and Corey Anderson. After picking up a decision win over Igor Pokrajac, Blachowicz lost two more fights to Alexander Gustafsson and Patrick Cummins. With a 2-4 UFC record at the time, the promotion was well within its right to cut him. But to the UFC’s credit, they gave Blachowicz another shot to prove himself, and he’s turned it around.

Since losing an ugly majority decision to Cummins in a fight where both men were completely exhausted at the end of the 15 mins, Blachowicz has been on a tear, with eight wins in his last nine fights. As always, Blachowicz’s legendary polish power has been on display during his run to the UFC light heavyweight title, as he knocked out Dominick Reyes, Corey Anderson, and Luke Rockhold along the way to the belt. He has also shown improved submission skills, such as when he submitted Devin Clark with a standing rear-naked choke. Blachowicz is a very well-rounded mixed martial artist and he continues to get better at his craft. Don’t let his age scare you. He might be 38 on paper, but Blachowicz still has plenty of good years left in MMA.

Taking a look at his title defense this weekend against Adesanya, Blachowicz is the underdog yet again. When you consider Blachowicz was an underdog against fighters such as Nikita Krylov, Rockhold, and Clark, it shouldn’t come as a surprise that he’s being counted out here against Adesanya. After all, Adesanya is one of the biggest names in the game right now and he’s been the favorite in all of his fights. He was always going to be favored to beat Blachowicz. But don’t let the public’s love affair with Adesanya fool you into thinking Blachowicz doesn’t have a chance to win this fight. There is no doubt Adesanya is an excellent fighter and, potentially, one of the all-time greats. But he’s the one moving to 205lbs, and until he can prove he can eat a punch from someone as big and strong as Blachowicz is, there are still question marks about Adesanya. Don’t make the mistake of overlooking Blachowicz again in this fight.

Think about it, the man has 10 wins in the UFC and eight of those have come as an underdog, including his UFC debut in 2014 against Ilir Latifi. But after going 2-4 in his first six UFC fights, you couldn’t blame people for wanting to fade Blachowicz, especially after that terrible fight with Cummins where he was outwrestled and gassed out. But it just feels like that fight with Cummins was what Blachowicz needed to wake up, and since then, the man has really turned it around. He’s won eight of his last nine fights and, save for a surprising KO loss to Thiago Santos, he’s made his fights look relatively easy. This is one impressive fighter in almost every area of MMA, and he keeps getting better every time we see him step back into the Octagon.

You have to love seeing fighters evolve during their careers like Blachowicz has. He knew that he had a massive gap in his grappling, and he worked hard to get better at that part of his game and become a more well-rounded fighter. His striking has also improved, as has his defense and his fight IQ, not to mention his conditioning. This is a fighter who was never expected to be here. But now he is at the top of the ladder and he isn’t leaving. Blachowicz has one heck of a challenge in front of him this weekend when he fights Adesanya, who is one of the best fighters on the planet. But don’t make the mistake of counting them out. The odds can say what they want, but Blachowicz has all the tools necessary to win this fight against Adesanya, and don’t be surprised if he ends up walking out of the Octagon with his hand raised at UFC 259.